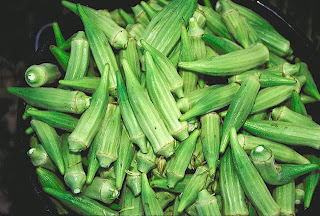 On my last days in Mumbai, I finally came up with the nerve to try out Okra, a plentiful vegetable available everywhere in India, and rich in vitamin A, thiamin, vitamin B6, vitamin C, folic acid, riboflavin, calcium, zinc and dietary fiber. It is also enriched with amino acids, with the likes of tryptophan, cystine and other sulfur amino acids. It’s an ideal vegetable to include in your diet when your sweating a lot, as it’s naturally high in sodium, and the soluble fiber and mucin content of this versatile vegetable aids the elimination system and soothes the small intestine.

I was put off using this vegetable because I kept reading about how it secreted a “slimy goo” once sliced open and cooked, but when you cook it whole, or cook it with something acidic like tomatoes or a few drops of lemon juice, this effect is greatly reduced, and also it really thickens a stew, so it’s popular in these kinds of dishes. I ended up doing both. I used tomatoes and a squeeze of lemon juice in the recipe, and allowed the mucin that was secreted to thicken the dish into a delicious, rich-tasting meal.

2 T of flour mixed with a heavy pinch of salt

I like to make my “stews” as compositions, in general. By that I mean that whenever possible, I cook the ingredients separately and toss everything together at the end. This makes the texture of the stew much better, in my opinion, and as long as each component is ripping with great flavor, the stew doesn’t lose out in that area.

First, get the tomatoes started. I find that roasting tomatoes really brings out their flavor, and it’s become one of my favorite ways to prep them for a meal. Turn the oven on to broil, and make sure the oven rack is set up to the highest level. Cut the tomatoes in half, sprinkle with salt and pepper, toss in the olive oil, and spread out on a cookie sheet to broil. They should be done in about 15 minutes, depending on your oven temperature. Just be sure not to burn them, so gently move them every 5 or so minutes, or simply turn the tray around, but don’t mash them. They’re much prettier if they stay intact. Meanwhile, get a small fry pan hot with the ghee, quickly toss the okra in the flour, being sure to shake off any excess, and then fry them until the outsides are a nice golden color, and a little bit crisped. Remove from the pan, add the rest of the ghee with the onions and cook until the onions have softened. Add the chick peas, lemon juice, masala spice and the cinnamon and cook for about 8 minutes, adding water 1 tablespoon at a time if necessary. Remove the tomatoes from the oven. When the chickpeas are cooked, gently fold in the tomatoes and okra, adjust the seasoning and serve. I like to crumble a little paneer on top of this dish, but it is entirely up to you!

I’m Michelle: Macros Based Whole Foods Chef, Transformation Coach, Powerlifter and Canadian Yoga Champion. My husband and I spend our time between Montreal and Tulum, and I love blogging about the things that I love: fitness, food and fashion. <3 Read more...

More from the Blog