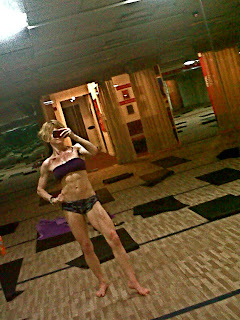 Well, as you know I spent December and January preparing for my photoshoot with Oxygen magazine, and then had a bit of a break from dieting for a couple of weeks. I never binge, I prefer eating small meals, but I did enjoy good french breads and cheese while I was home in Quebec. When I returned to India, I immediately fell sick with food poisoning, (though I suspect I contracted something from the mosquito bites I got the first two nights back). At any rate, I was sick as a dog for a good 5 days, and couldn’t even leave my bed let alone train. I also decided to start training for the Eastern Canada qualifier for the Bishnu Ghosh Yoga Cup, which means that for the next two months, my training focus has shifted from body-building to flexibility training. That means I’m spending a lot of time in the yoga studio, doing a ton of backben 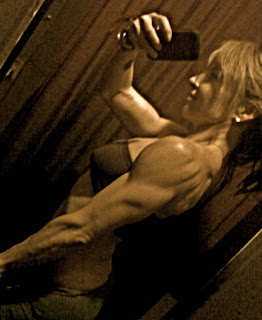 ds, splits, stretching exercises, and practicing my competition routine over-and-over again. It hard to eat when I’m doing so much yoga…it has a dampening effect on my appetite, and it’s also uncomfortable training with anything in my stomach, so I’ve had to rethink my nutrition. I don’t want 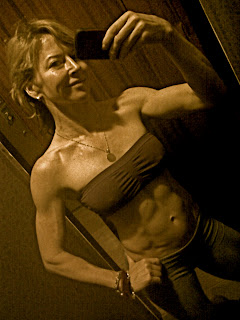 any inflammation caused from food, so I’ve had to really tighten up on sugar and cereal grains. So far I think I’m doing well on dairy and coffee, and I’m also eating more vegetable starches and fruits to keep up muscle glycogen. I’m concerned about losing the muscle I’ve put on this last year, especially as my workouts have lightened up in order to minimize inflammation that might hamper my yoga progression. It’s been easy to do both yoga and body-building thus far, but now it’s become a little more complicated. I’ll be documenting my progression leading up to the competition, with food logs as well as gym workouts, so you can see how it can be possible with a bit of tweaking to do both. I really want to show that if I can do it at this level, then anyone in bodybuilding can maintain a regular Bikram Beginner’s practice without fear of losing muscle mass!

I’m Michelle: Macros Based Whole Foods Chef, Transformation Coach, Powerlifter and Canadian Yoga Champion. My husband and I spend our time between Montreal and Tulum, and I love blogging about the things that I love: fitness, food and fashion. <3 Read more...

More from the Blog